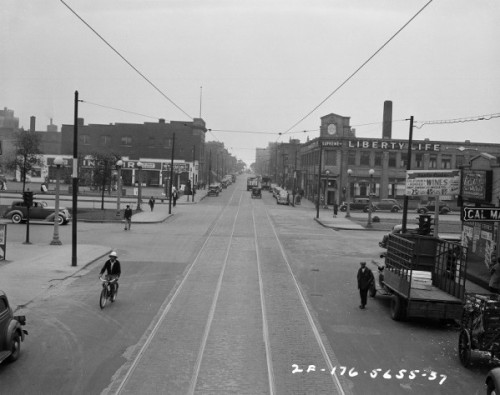 “The importance of hard work and persistence was great advice that [John H. Johnson] gave me. He also talked about the importance of having vision. He often said that a lot of times young people get sidetracked because they have these big dreams. He encouraged young people to start with a smaller dream. Dream small dreams because each smaller dream you can build more and more on. He would say, ‘I did not start out dreaming that all of this was going to happen. I just wanted to start with my first magazine and build from there…'” – Lydia Davis Eady, former Vice President of Marketing at Johnson Publishing Company

Ebony and Jet were born here.

3501 South Parkway, the original location of the Supreme Life Insurance Company, is where John H. Johnson produced his first publications including Negro Digest in 1942. Modeled off of exclusive publications like Reader’s Digest, Negro Digest was Johnson’s first magazine and was later renamed Black World to reflect the changing times.  Negro Digest was one of the early and most successful pocket magazines with guest writings of several history-changing figures. Dr. Martin Luther King Jr., Gwendolyn Brooks and First Lady Eleanor Roosevelt each contributed words to its pages. Johnson Publishing Company was born in a small, closet-like office space in this building generously offered to him by Earl B. Dickerson, future president of the Supreme Life Insurance Company. Johnson’s future wife Eunice Walker Johnson acted as secretary at the time. From his early days as an employee of the Supreme Life Insurance Company to building the Johnson Publishing Company empire, John H. Johnson became one of the leading figures in business and community service.

Known to some as one of the first spaces for Johnson Publishing Company and Associated Negro Press, this building started off as the headquarters of one of the earliest and most successful African-American owned and operated insurance companies in the north. Founded in 1919 by Frank L. Gillespie as the Liberty Life Insurance Company, in 1921 the firm moved into the second floor. Liberty Life bought the entire structure in 1924 and in 1929 it merged with two other firms and formed the Supreme Life Insurance Company of America. Being one of the few major businesses of Black Metropolis to survive the Great Depression, in 1950 the company modernized the building using porcelain metal panels to cover the initial design. Half a century later, after a campaign to save the building, original classic facade was restored.

Today you can find the Bronzeville Visitor Information Center which is located in the old offices of the Supreme Life Insurance Company, Teague & Knight Associates, Black Star Project, Seaway Bank and Trust Company and Rick’s Munchies maintaining the former glory of the building.